The Chargers have expressed real frustration with the City of San Diego over the last several days. So announcing an LA stadium plan seems like the next logical step. But the Raiders? Say it ain’t so, Mark!?!? 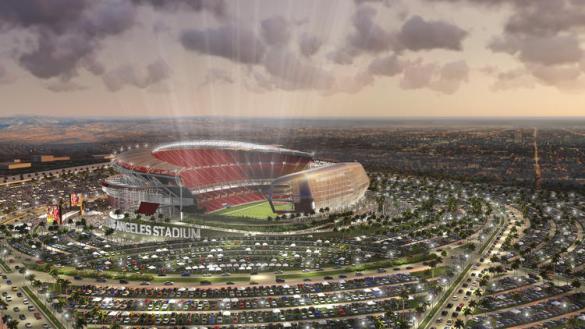 The LA Times’ Sam Farmer has the scoop, describing the deal as a Plan B for both teams if they can’t work out “publicly financed” stadium deals in San Diego and Oakland, respectively. The teams quickly followed up with their own joint statement, explaining their plans with a surprising amount of detail – at least at this early stage. The statement:

There’s a lot to unpack here, so let’s start from the top. The first five bullets are meant to curry favor with the true audience for this statement, the NFL and its constituent team owners. It’s Dean Spanos and Mark Davis saying to the owners, Look, if you want someone who’s going to play by the rules, who won’t go rogue *cough*Kroenke*cough, it’s us. Stan Kroenke’s actions have taken much of the leverage over LA away from the NFL despite the league’s protestations, so the play here may be that if Kroenke gets stuck in litigation with the league, Spanos and Davis may benefit by getting the two LA slots. By the time the dust settles, the Chargers and Raiders will already be in LA and the Rams may be stuck in St. Louis. Most importantly, Farmer’s report revealed that the Chargers and Raiders bought the 168-acre plot of land in Carson on which the stadium would sit. That’s more than a mere verbal threat, that’s real action.

Kroenke, who didn’t buy land in Inglewood to sit on it, probably anticipated this, while having talks with Spanos and Davis about partnering up in The Wood. He claims to have a privately financed stadium there. Spanos & Davis claim to have a privately financed stadium in Carson. Let’s be clear, though, TWO privately financed stadia in LA don’t work. Even with a market the size of LA, that’s too many suites to sell, too many sponsorship commitments. Two stadia would compete with each other for Super Bowls, NCAA playoff games and any number of other big events, effectively cutting into each other’s profitability and feasibility. If we want to term this a race to LA, there are at most two teams that can win and one stadium plan that can win.

That’s the hedge part, or so we’re being led to believe. The leverage play from Spanos and Davis is that they’re still working on plans in their hometowns. Spanos has allowed team lawyer Mark Fabiani to be the bulldog, quickly getting into a war of words with San Diego Mayor Kevin Faulconer. Davis, who appeared to say the right things only a month ago when he said he wanted to pursue his own stadium plan, is now running back to Floyd Kephart and Coliseum City. If Davis wasn’t on board with CC before, what’s going to change now to make him sign on, besides being backed into a corner? Having LA as an option is a hedge against that very possibility. If you look at what’s been happening in both cities, there isn’t much progress. Neither city wants to to provide any public funding. Both cities’ greatest asset is land, which isn’t nearly as good as money. The Chargers are being aggressive, whereas the Raiders are waffling.

The Chargers’ attacks on San Diego can be considered the first blink after Kroenke’s plan was unveiled. This joint-stadium plan is the second blink. Who blinks next? San Diego and/or Oakland, in order to force everyone to the table? Or is it Kroenke, who may want to accelerate his plan in order to keep others from taking his leverage away? Or perhaps it’s Roger Goodell, who is in danger of losing control over the process?

The boldest move would come from either Faulconer or Oakland Mayor Libby Schaaf. These cities don’t have to be pawns in the stadium extortion game, one that has gotten exponentially more complex because of the number of factors involved. They could call this bluff. The only winning move is not to play, right? It’s one thing for the teams have land. It’s another to actually assemble a shared stadium deal that works for both teams. While MetLife Stadium can be considered a success for the Giants and Jets financially, in use it’s a lifeless gray mess, terribly lacking in home field advantage and absent either team’s character or signature. Do Spanos and Davis really want to go down that path? The LA stadium renderings, done by Warriors’ SF arena firm Manica Architecture, look like Levi’s Stadium 2.0 – similar caste system bowl layout, red seats, and no façade. At least there’s a partial roof.

In the end, the promise of a huge valuation raise may prove too alluring to dismiss for these teams. It’s easy to give lip service in trying to build at home, but it may be the toughest challenge to stay. Even with things moving as fast as they are in 2015, it’s still too early to predict how this is all going to shake out. There are many, many moves left in this game. It’ll be fascinating to watch, that’s certain.