A long day and night of talking and grandstanding is over. Alameda County’s Board of Supervisors approved the Ronnie Lott-Fortress Investment Group stadium deal framework around lunchtime. It’s a term sheet, so it has some basic details worked out, but not some extremely important ones, such as the approval of the Raiders and owner Mark Davis. Oakland’s City Council approved the same term sheet late Tuesday night. For what it’s worth, the AlCo BoS vote was 3-1-1. City Council voted 7-0-1. The voted and the completion of the term sheet were needed this week in time for the NFL’s owners meetings, which are taking place in Irving, TX. Updates on stadium plans for the Raiders and Chargers are expected.

I figured I should set the table for my readers and followers, so I tweeted the following shortly after the Council vote:

Remember this is the “framework” vote. Will need at least four more votes for stadium deal:
1. ENA
2. Proposal
3. Dissolution of JPA
4. DDA

There may be other votes, including an extension of the ENA if the Raiders are resistant to the proposal, or it changes in major or fundamental ways. As for the cryptic acronyms, drop them in the search box at the top right of this page. Then read.

Let’s take a look at how this framework works. 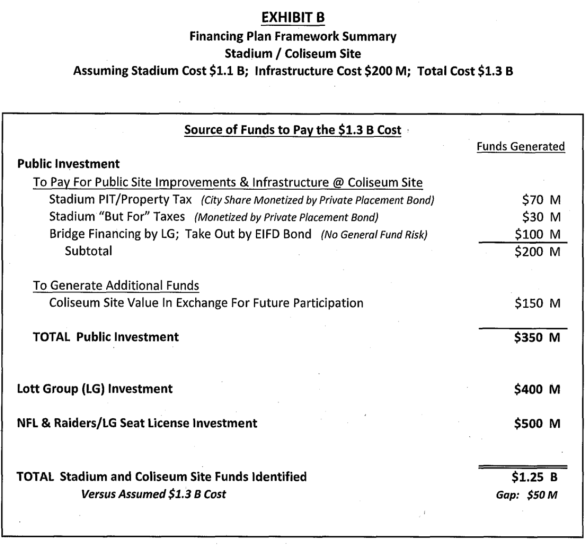 Lott-Fortress estimate the stadium’s cost to be $1.3 billion for a 55,000 open-air NFL-compliant stadium. The capacity is lower than the average NFL venue by design; it’s what Mark Davis requested. Fans seem to be comfortable with the capacity as well, as that’s nearly the same capacity as the Coliseum’s football configurations over the last several seasons. Curiously, there haven’t been many questions about how the cost ballooned from $700 million to $1.3 billion in a matter of a few years. Some of that can be explained by the new estimate’s inclusion of infrastructure spending, an item often omitted due to it being a table stakes requirement for cities to cover. Oakland and Alameda County are also throwing in the land via lease or sale. The land has an appraised value of $150 million. Combine that with the $200 million in infrastructure and the total public contribution is projected to be $350 million.

City and County are both touting the claim that the $2oo million in bonds that will have to be issued to cover the infrastructure piece won’t affect either party’s general fund. That’s possible because half of the infrastructure will be paid by taxes backing an EIFD (Enhanced Infrastructure Financing District) bond issue, the rest backed by private bonds. This is essentially the new, limited form of redevelopment that Governor Jerry Brown supported after he dismantled legacy redevelopment agencies in 2011. Restrictions include the inability to use the funds for anything other than actual infrastructure (roads, utilities), so cities can’t raise funds directly for stadium construction. Raised money is also restricted from affecting the general fund, though it’s unclear what would happen if an EIFD defaults on its bonds. It will take some education by pols to explain to constituents how Oakland will be kept safe, especially given the debacle that was Mount Davis. 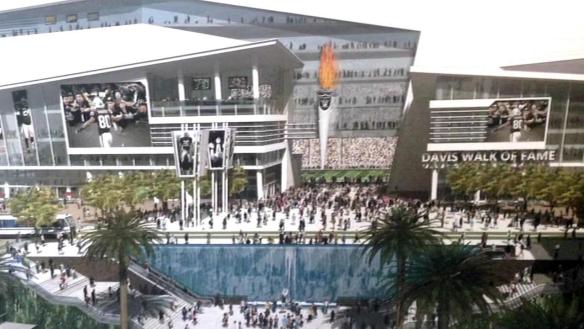 $81 million in debt remains on the stadium, draining city and county coffers every year. Another $100 million remains on Oracle Arena, which will need to be paid off even if/when the Warriors leave for San Francisco. City/County have not factored the debt into the term sheet, so they will continue to pay for it now and into the future. City has been negotiating assuming the debt from the County for years. The Lott-Fortress proposal shifted that a bit, so that the County remains half-ownership of the land but assumes no other risk.

Claudia Cappio says the county would pay the 140M to the bond holders, and that #Oakland would pay our $50M share to the county. #oakmtg

Paying the debt off early would allow Oakland to demolish the existing Coliseum, which sits on a key, central portion of the Coliseum complex.

I don’t know nearly enough about Fortress to comment on them, so I’ll refrain from doing that here. Lott and Fortress say they don’t need an ownership stake to be successful. I can’t see how they can get any kind of good return on a $400 million investment from mostly ancillary revenues. There are no charity cases in the NFL.

Does this move the needle for the league? Not according to stadium/relocation veep Eric Grubman, who threw a bucket of cold water on the proceedings today. Grubman even called the Lott-Fortress proposal a ‘carbon copy’ of last year’s failed Coliseum City plan, which was widely ridiculed in league circles.

Why would Grubman and owners think this way? Because, as I noted previously, what Oakland is offering is table stakes. They aren’t pledging any money towards the construction. They (nor Lott-Fortress) have convinced the Raiders to sign on, though that’s because Davis is committed to Las Vegas, at least until the relocation vote next January or March. Vegas aside, the NFL usually requires a much larger investment from interested cities. The limited risk and exposure that Oakland and Alameda touted in the term sheet is actually a negative for the NFL, whose position is that interested cities prove their worthiness by spending (How else would cities get into such bad stadium deals?). Pro football has kept Oakland in the game in hopes of the City showing the NFL more love. The combination of Oakland’s intransigence and Davis’s recalcitrance makes for a proposal that Grubman characterizes as not a deal at all.

If, as expected, the NFL laughs off the proposal, what will Oakland do next? Will Mayor Libby Schaaf bite the bullet and walk away from the table, or will she rally for Oakland to put together an improved plan that actually includes more public money? At least two Council members (Annie Campbell Washington and Abel Guillen) mentioned that they had many calls and emails asking them to oppose the deal. That sentiment will only grow if more public money is put on the line and the claims of insulation from the general fund become invalid. Vegas has plenty of issues of its own surrounding funding and the potential for Sheldon Adelson to become involved. Deal terms are stronger there thanks to a pledge of $750 million from Clark County.

The Oakland and San Diego questions are not just tests for the incumbent cities. They’re also tests of the NFL itself. In the league insatiable thirst for revenue, it has  demanded king’s ransoms from communities. How much is it willing to upset existing fanbases in Roger Goodell’s never ending quest for the almighty dollar? How much does the NFL value regular fans? If history is any guide, it doesn’t look good for them.

P.S. – The funniest and most surprising moment of the proceedings came during the County Board meeting, when noted Raiders ‘superfan’ Dr. Death spoke during the public comments period. After his plea for support, Supervisor Keith Carson asked Death if he was singling Carson out as a ‘No’ vote and spreading rumors. Death didn’t deny this, and Carson blew up at him, yelling that Death didn’t attempt to call Carson’s office and only assumed Carson was a No. Death left, his manhood squashed. He was right, though, Carson did provide the one No vote. Carson later apologized, perhaps after Death left to return to his home in the Sacramento area. If only I had video of the moment…

P.P.S. – There were no new renderings presented.

NFL exec Eric Grubman told reporters he gave a negative presentation to owners on OAK proposal;doesn't like fortress exclusive or …1/2

….2/2 and calls stadium taxes a team source, not a public one. This was disagreed on at monday meeting btwn team, nfl, oak and fortress