Take a look at a piece of the rendering below.

View southeast from behind home plate

Pretty cool, right? You can see the three decks (four if you count the green roof deck). There are the trees lining the roof. And the awesome shipping cranes in the background. Do you know what you won’t see?

The shortest “splash hit” to reach McCovey Cove at AT&T Park went a distance of 367 feet. According to Google Earth, a ball only needs to be hit 362 feet to be a true splash hit without first bouncing on the promenade. How long do you think a ball would have to be hit to reach the water at Howard Terminal?

Based on my calculations, at least 700 feet down the right field line.

And you know what? That’s okay. Because of the somewhat enclosed nature of the outfield, a slugger would have to both hit a ball 700 feet long and more than 100 feet high to clear the grandstand. It probably would have to be rising as it leaves the ballpark – unless a dinger could somehow travel through the empty spaces in the outfield, not hit any fans or employees working on the concourses, and avoid trees and food trucks in the right field plaza.

You should be able to see the water from the upper deck. Maybe the second deck as well. But splash hits are a silly way to measure the worthiness of a ballpark. The concept of a splash hit is barely 20 years old! If the A’s are able to overcome all of the numerous obstacles to get this thing built, splash hits won’t be a big deal in the slightest.

There are plenty of good things about the location and setting as situated. Thanks to the orientation of the field and the placement of the stadium, there will be that large landing beyond the stadium in right. 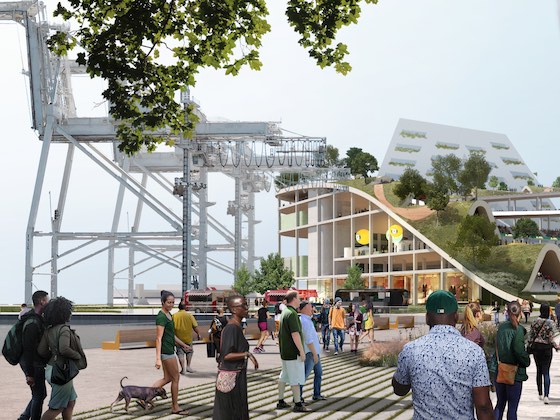 The plaza you see above is every bit as much a blank canvas as the actual ballpark. I project it to cover a half-acre. Not a half-Mark Acre, 20-25,000 square feet. That’s a lot of space for food trucks, a Rickey Henderson park for kids, and monuments to other A’s greats. The possibilities are endless.

As ballyhooed as the hire of Bjarke Ingels Group was, the key player for this plaza is a lesser known but still important landscape architecture firm, James Corner Field Operations. They worked on the High Line in New York, Navy Pier in Chicago, and Seattle’s Central Waterfront. Field Operations’ portfolio is global and striking. Their expertise could be the key to make Howard Terminal a true destination of its own, not just a wharf adjacent to Jack London Square. Not to diminish BIG’s talents, but Field Operations will make everything fans interface with at the ground level.

There is legacy contamination in the areas where they will be building, That’s been capped, but generally those doing the capping haven’t lined it from below. And that means when the groundwater comes up, those contaminants can be remobilized.

I asked Kaval about this. He said that the San Jose Airport West site, on which Avaya Stadium was built, underwent extensive cleanup and had groundwater monitoring wells installed. So far, so good. But there is one major difference between Airport West, which used to be a factory for defense contractor FMC, and Howard Terminal. The San Jose site isn’t on the water, and is 9 miles upstream from the bay. As you all know by now, Howard Terminal is directly on the bay. How to deal with it? At least BIG has some experience. Hill:

They (BIG) know about coastal design, but they have mostly worked in Europe and they may not have had to work with this kind of issue. Europe hasn’t done as much as the U.S. to monitor water quality. It has done more in isolating and removing contaminated soils. So European firms may not have had to think as much about how rising groundwater could remobilize wastes.

These concerns about Howard Terminal have been well-known and well-documented for years. As much as I admire BIG’s work, they’re not magicians.

Remember, the Port of Oakland entered a use covenant regarding Howard Terminal. It stated:

Based on the Human Health and Ecological Risk Assessment, the Department concluded that use of the Property as residence, hospital, school or day care center would entail an unacceptable cancer risk. The Department concluded that the Property, as remediated in accordance with the approved Removal Action Workplan, and subject to the restrictions of the Covenant, does not present an unacceptable threat to human safety or environment, if limited to current terminal use.

Now that there’s no long-term terminal operator at Howard Terminal, the Port and City of Oakland are freed up to pursue this ballpark development. The risks, however, still remain. And as we’ve been made fully aware, groundwater isn’t the only potential problem. Schnitzer Steel’s toxics can fill the air. Look at that rendering above on a beautiful sunny spring or summer game day. Now imagine a plume of smoke rising from Schnitzer Steel to the west. Will the first giveaway item be dust masks? Or water filters?

My dust mask turned brown after being outside for a few hours today. No, this isn’t makeup. Makeup would be on the INSIDE of the mask too. Keep that in mind if you’re in NorCal like me. #CampFire #CaliforniaFires #California pic.twitter.com/iOjVqwNBE0

The hope appears to be that Schnitzer will “wise up” and sell, then relocate. That strategy didn’t work for the A’s at Coliseum North. It didn’t work at either Fremont site. And it didn’t work in San Jose.

For future use, here’s a brief lexicon of terms that will be used when discussing Howard Terminal going forward.

This is gonna take a while. Get started by reading the CEQA Notice of Preparation filed by the A’s last Friday. Or read about the AB 734, the CEQA streamlining that passed earlier this year. Head in the clouds, feet on the ground.

P.S. – That 700-foot home run distance is something, right? Remember when the Warriors were going to build their waterfront arena on Piers 30-32 in San Francisco? Well, they ended up moving to the site where Chase Center is being built. How long do you think a Steph Curry three-pointer from the shoreline is? About 600 feet.